Situated on the southern outskirts of Norwich, Marston Marsh, a Local Nature Reserve, is a flood plain marsh consisting of an area of approximately 60 acres. The river Yare borders its northern side and Marston Lane its southern side, providing the main access to the site. It is owned by the Norwich City Council and managed by the Norwich Fringe Project under the Higher Level Stewardship scheme (HLS) and the County Wildlife Site (CWS 1459) agreements.

When the Fringe Project took on the site in 2009, there was no management plan in place, grazing cattle on the marsh roamed everywhere, the ditch system was not working when the River Yare flooded and grassland communities had declined.

Keeping the pathways clear during the summer months for the public to enjoy. 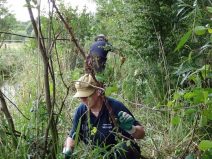 Coppicing the willow around the ditches and banks of marsh to slow down succession.

Maintaining the stock fencing and squeeze gates found on the marsh. 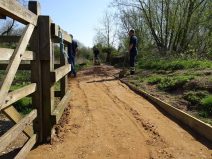 Maintaining the circular pathways that exist for the public to walk around the site.

Installation of a new stock fence for the grazing cattle.

Installation of a new entrance gate to the marsh.

Steps were taken whereby a management and work plan was produced; public consultations were carried out to engage with and involve the local community; a new cattle grazing regime was installed along with the creation of four paddocks for rotational grazing; ditches where dug out and a new water control system installed to enable higher water levels in winter (for wader, water fowl) and lower levels in the summer months; new fencing was installed and the newly dug ditches used as wet fences. A full Phase 1 National Vegetation Survey was carried out to understand the existing plant biodiversity and funding was secured from the Big Lottery Fund through the Eaton Residents Association whereby a hard surface access path was constructed for the public, to walk around and through the site.

The marsh is a great place to see invertebrates.

Some of the many wildflowers that can be found on the marsh. 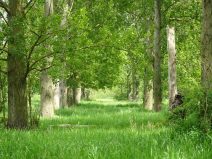 Some of the varieties of different trees that can be found on the marsh.

Mating Azure damselflies are just one the variety of dragonflies and damselflies that can be found on the marsh. 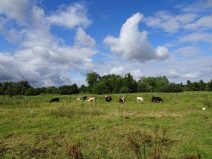 Our ladies of the marsh, that help keep the more dominate sedge at bay and encourage the marshland wildflowers and grasses to grow.